The church bells started ringing when I heard roaring coming from underneath the bed. I thought I have to keep calm. My husband was sleeping on the side of bed close to the balcony which was open. People were chatting, laughing, walking. I could hear a liquid poured into glasses and music playing. We were on our yearly summer vacation trip — the Mediterranean. We used to have sex a lot on vacation. Since he got his job promotion, he lost his appetite. I didn’t.

That morning, at the pool, I bumped into a nicely tanned, healthy-looking man with beautiful sparkly eyes. We started to talk. I got excited. I felt chills, and I whispered him my wild wishes. He smiled, nodded and roared quietly. I was fond of wildcats.

I was finishing the peach sorbet when a waiter delivered a note. It was short, messy, handwritten – midnight, roaring, underneath the bed. I didn’t understand it, but I decided to follow my instincts.

I almost dozed off when I heard that roaring sound. I opened my eyes. O, no, he is under our bed?! How he managed to get there without me noticing him earlier?

We met again by the pool. We nodded. Perfectly pressed security officer uniform looked great on him.

Two days ago I found out thehummingbirdpost.com blog holds a contest for emerging writers. Well, I can not resist an opportunity to write. Even the deadline was short I made it. I wrote a short story. I enjoyed it, I practiced, and I kept my promise.

If you are reading the post, I hope it will inspire you to keep your promise. Keeping promises which enlight us keep us alive and running. Hope you will enjoy the story too.

It was a hot day. Too hot for him. Winter was his favorite season. He loved cold. He enjoyed temperatures under ten degrees, land covered in white and his boots squicking. Fresh air would help him clear his thoughts. They were spinning, and he felt a bit dizzy. It was a big day. He had an appointment with a doctor.

Four years ago he had brain surgery. It was a tumor, and the doctor wasn’t optimistic. He did not say it aloud, could not look him into eyes. While in a hospital he did not like sadness and powerlessness present around. Though, he felt optimistic living home. He made a promise.

Before illness he was shy. He would not dare talk to strangers, especially beautiful ladies, but he decided to overcome his fears. Each day he would go out for a long stroll, and he would greet every person along the way. As he got courageous, he started to talk to strangers, and he kept his promise every day for the past four years.

The doctor told him he still got a tumor, but his blood tests were normal. He proposed another set of tests, but he refused. On his way home he met a beautiful lady. She greeted him with a smile and hugged him.

„Stjepan, you were right. It all turned out well. My project is accepted, and it will be founded. Thank you. Thank you.“ They talked for a quarter an hour.

When he got home and changed his clothes, he felt great. It was a good sign.

I was dancing around the kitchen table in excitement. I did not have the patience to finish a slice of bread and a glass of milk, but the grandmother was determined.

„My child, she told me, „breakfast is the most important meal of the day. If you skip it, you will not have enough strength during the day. Sit and finish the meal.“

„No grandmum, I am not charmed with your big watery eyes.“

„It is my birthday, can I be excused?“

Grandmum was tough, and I knew she would not yield. When we finished cleaning up the table she asked me to bring her some flowers from the garden.

As I opened the front door, a big parcel stood on the ground. It was wrapped in a white paper and tied with the yellow ribbon. I ripped the paper hoping my wish has come true. There was my red bicycle with a trumpet as a bell. I squeeze it several times, and I yelled:

„ Grandmum, come, come, see what I got as a birthday present!“

Grandmum was standing at the door smiling. Till the end of the day, I had a plaster on my knee, but I did not complain. I knew the summer holidays would be the best with my new bicycle. 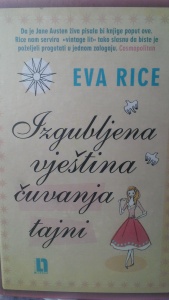